Dolphin watching allows you to observe these amazing animals in their natural habitats. While it is primarily recreational, the activity can also be part of a scientific or educational study. Dolphin watching can be a life-changing experience. Millions of people participate in a wide variety of trips so that they can witness these intelligent creatures in the wild.

Dolphins, part of the cetacean family, are closely related to porpoises and whales. The aquatic mammals typically travel in groups of 10 to 30 animals known as pods. Dolphins are warm-blooded animals that require oxygen to survive. Highly intelligent, they have a large brain to body mass ratio that is similar to apes and second only to humans. Their keen intellect is considered the primary reason that they have the ability to mimic, recognize themselves, use artificial language and categorize objects. Their emotional and cognitive intelligence is on display when they interact with humans and other members of the pod. They inhabit in inshore and offshore areas along temperate and tropical coasts worldwide.

Splashin’ around with the locals 💦

Subsisting on a diet of small fish, squid and invertebrates, the animals can hunt for food individually or as a team. Dolphins search for food using echolocation, which is similar to sonar. They emit clicking noises and then listen for the echo to determine what objects are within range. Along with searching for food, echolocation helps them navigate and avoid predators. Dolphins emit similar clicks and squeaking noises through their blowholes as well as fin slaps on the water to communicate. Each dolphin has a unique tone, or signature whistle, which distinguishes it from other dolphins.

Larger shark species like bull and great whites are their natural predators. Dolphins defend themselves by charging the sharks. Large pods have been known to turn the shark into the prey. Dolphins also work together to support an injured member of the pod by keeping it afloat. It is against federal law to harass or feed dolphins in the wild. As a result, it is important that you only embark on a dolphin-watching cruise that fully supports the responsible viewing and protection of Key West dolphins.

The water around Key West is teeming with dolphins. Often mistaken for porpoises, Atlantic bottlenose dolphins are by far the most common species found in the area. Along with a long snout, they have dark gray backsides and lighter gray bellies. Adults have powerful robust bodies that can grow to a length between 6 and 13 feet. The animals may weigh between 300 and 1,400 pounds. This species is the same type of dolphin featured in the television series “Flipper” and performs in marine shows around the world. They have a life expectancy of approximately 25 years. 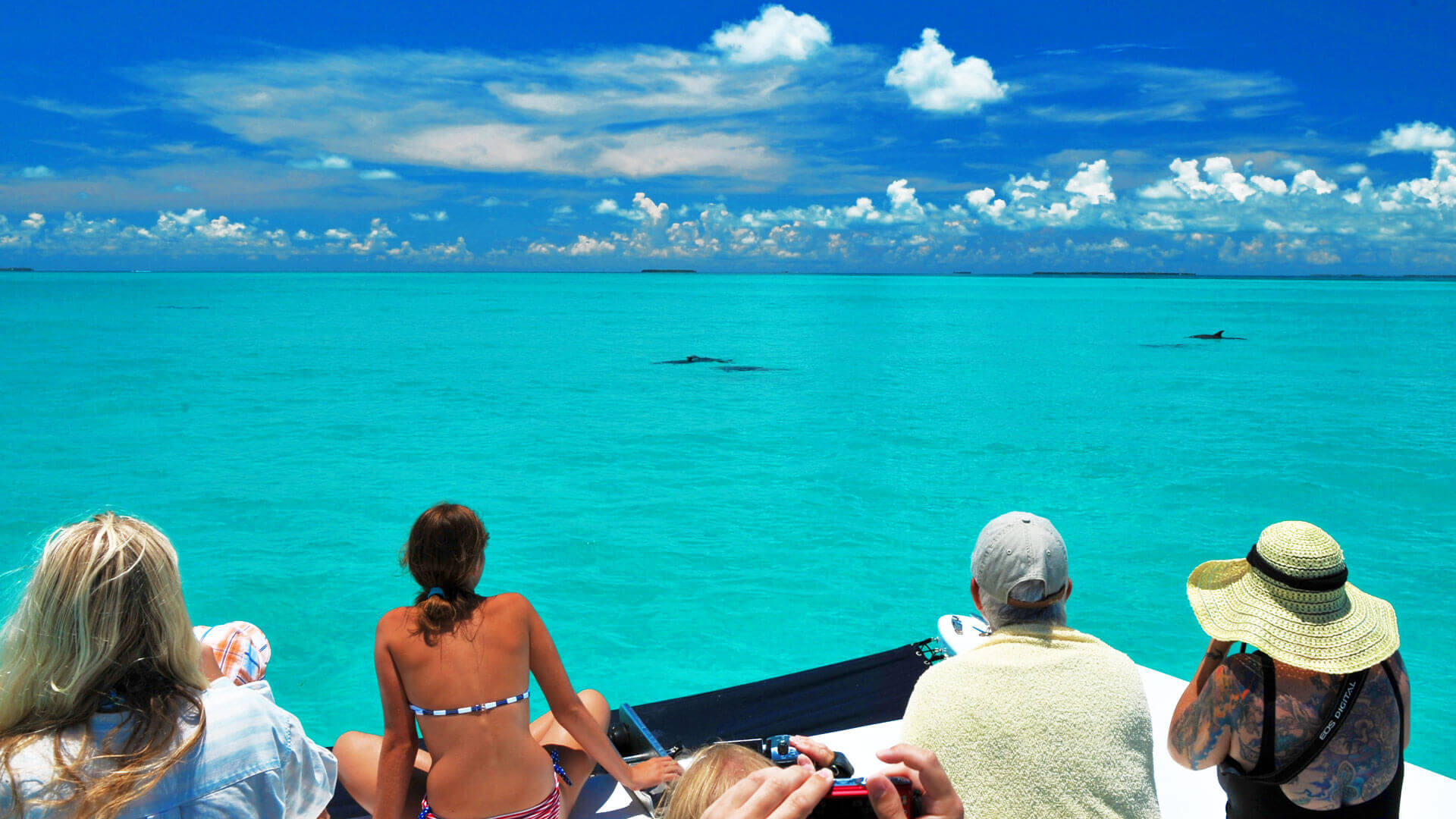 Other species of Key West dolphins that may be seen at various times around the island include the spinner, spotted and Risso’s dolphins. The spinner dolphin is characterized by its ability to perform aerobatic maneuvers that include turning along its longitudinal axis while it leaps into the air. As the name implies, adult spotted dolphins have blemishes on their skin. The monk dolphin, which is also known as Risso’s dolphin, has a large dorsal fin and a bulbous head with a vertical crease in the front.

Where to Interact with Dolphins

Dolphins can be very energetic and acrobatic. During a dolphin-watching tour, you may witness spyhopping behavior in which the animal raises its head vertically above the surface. Breaching occurs when the dolphin leaps completely out of the water. Along with riding the pressure wave in front of a vessel, a technique known as bow riding, the dolphin may also slap its pectoral or tail fin noisily against the surface of the water. These movements are known as pec-slapping and lobtailing. Before booking a trip, ask the operator what you should expect to see during the tour. The information typically includes the area that you will visit and the likelihood of seeing these animals.

An area of Key West’s shallow backcountry is known as the Dolphins’ Playground. It is an extraordinary feeding and breeding ground for dolphins. Along with a consistent depth of approximately 10 feet, the surrounding mangroves are a haven for small fish that comprise a significant portion of the dolphins’ diet. The area is a place where visitors can interact with these adorable mammals. You are almost guaranteed to spot a number of these aquatic animals in their natural habitat during a dolphin-watching tour.

Fury Dolphin Watch is a trip of a lifetime for nature lovers of all ages. You can observe dolphins playfully frolicking in the waves and then cruise into the Florida Keys backcountry for some snorkeling fun. The shallow reefs offer the opportunity to spot coral formations, stingrays and a variety of other marine life. Led by expert guides, this excursion is the only tour in the Florida Keys that possesses the coveted Dolphin SMART certification. This nationally recognized program certifies operators that protect and promote the responsible observance of these sea creatures in their natural habitat. The three-hour trip includes top-of-the-line snorkeling equipment and complimentary beverages. 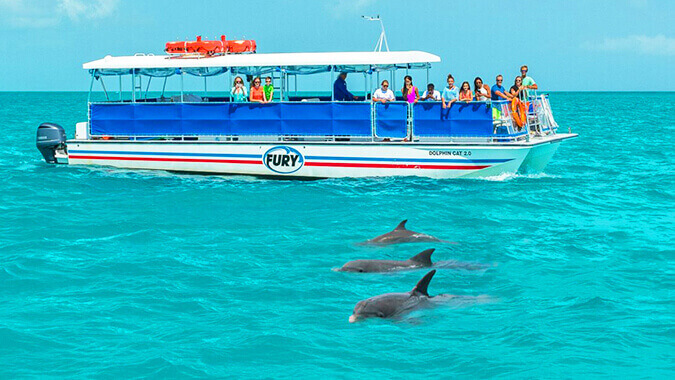 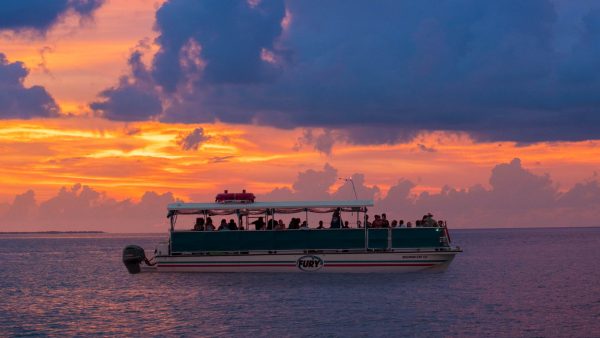 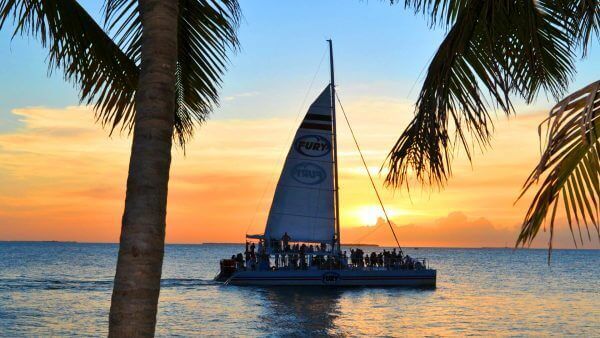