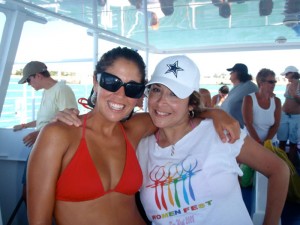 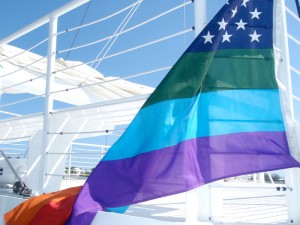 Friday’s annual All Ladies Ultimate Adventure has garnered fanfare since it’s inception three years ago. In fact, we have one customer, Bonita, who loves it so much she’s come back every single year. We do our best to offer an all-female crew for the ultimate in girly adventures! Former Fury Captain Mindi chartered the inaugural trip, and Captain Westy (the ladies love ‘em) has since taken over. I’ve worked the trip on the catamaran the last two years and this was my first year as a parasail mate. 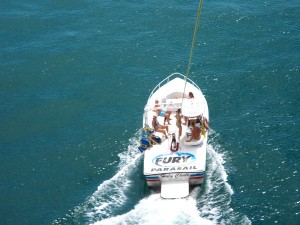 A bird’s eye view of the parasail boat.

We welcomed about 60 ladies Friday morning aboard the Key West Fury where Westy and his crew Agnes, Lindy, and Rob showed the gals a good time. Fury Girls Nicole, Becky, and Annabelle decided to flaunt their girl power and came along for the ride, too. Since it’s (almost) no one but us girls, the trip has always had a liberating topless optional policy. Rumor has it that some of the Fury Girls rid themselves of their tan lines on Friday, but I’m not naming names!

Captain Westy sailed to the reef for a morning of snorkeling and the crew served lunch as they made their way to Adventure Island for the rest of the day’s festivities. Captain Scotty and I had a blast parasailing the Connecticut all-female rock group who had a performance scheduled during the Saturday party on Duval Street.

The party continued for Westy and his crew Friday night with an exclusive sunset sail Tea Dance featuring DJ Pride. Saturday night Fury presented a very special Commotion on the Ocean sunset sail featuring the musical stylings of Michelle Dravis. After this weekend, all I can say is Womanfest 2009 ruled!