Fury Captains & Crew spend their days on the water–transporting guests on a variety of adventures, from chasing down the famous Key West sunset and snorkeling the reef to action-packed all day trips. But on this sunny December afternoon, it was anything but just another day in paradise for Captain Ryan Fredrick, Tomas Reiber, Abbey Brewster and Joe Suiro, the Fury Captain and Crew working an Ultimate Adventure trip. 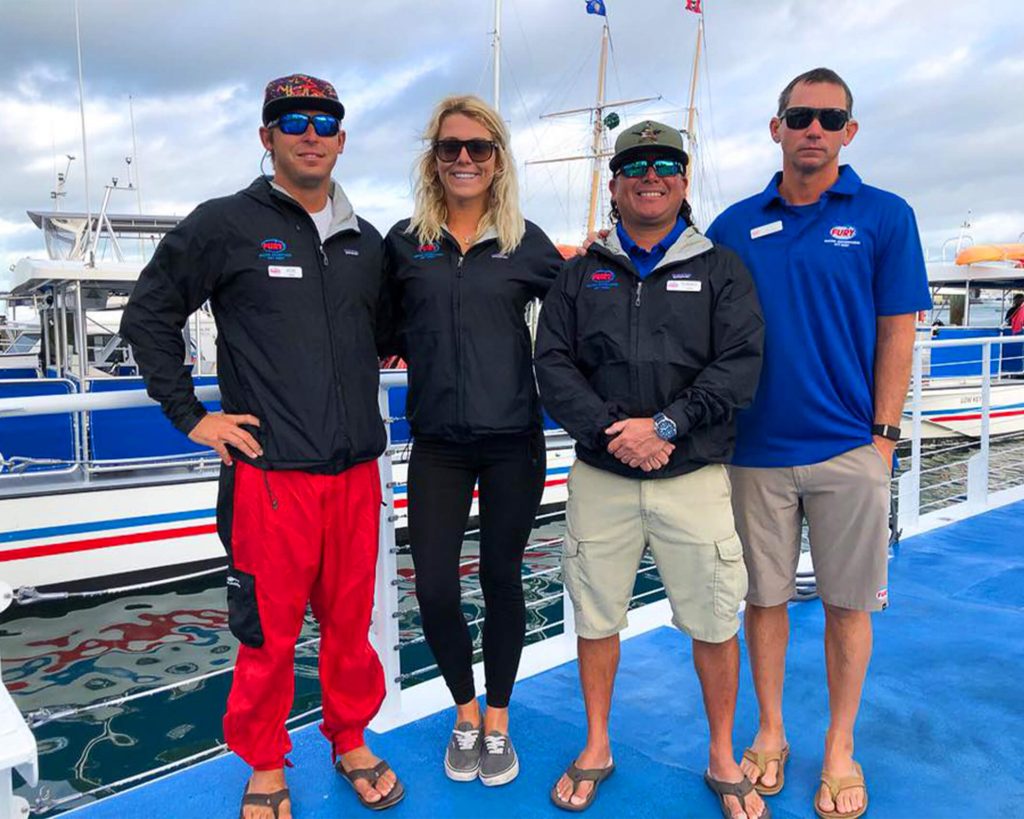 While their guests snorkeled the reef, Captain Ryan noticed a pod of dolphins swimming nearby. Thirty minutes later, when the snorkeling part of the trip came to an end, Ryan was surprised that the dolphins were still in the same spot, a little unusual for these animals. But he thought it’d be great for the guests to have the opportunity to see these playful creatures in their natural environment. After all, observing wild dolphins is something that so many people who visit Key West dream of–Fury offers a Dolphin Watch tour that is popular among tourists.

Once everyone was back onboard, he began to slowly sail closer to ensure they wouldn’t scare them off. But as he approached, he noticed that that the dolphins weren’t playing at all–that in fact a juvenile bottlenose was frantically attempting to jump out of the water, then plunging under over and over. The poor creature was tangled in a line of a lobster trap–dragging the 75 pound contraption by his tail and fighting for its life by trying to reach the surface for breaths. Once they got close enough, the crew realized that another dolphin, presumably the mother, was frantically swimming under the baby and pushing it up as best she could to save him from drowning. 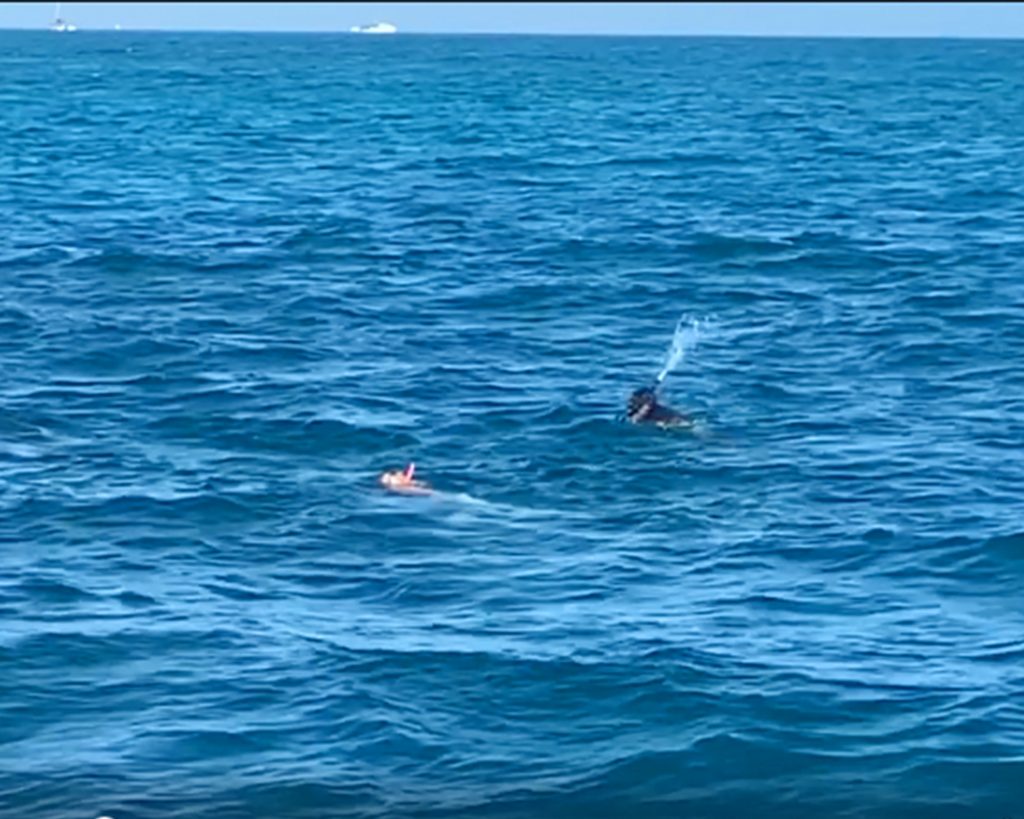 It was clear that the Fury crew had to act fast to get in the water and cut the line, but because it is illegal to swim with wild dolphins, Fredrick had crew member Joe Suiro radio the authorities to get permission. Since the animal was in imminent danger they authorized the crew to take whatever action they could to safely rescue the dolphin. Crew members Tomas Reiber and Abbey Brewster sprang into action, jumping into the water and carefully approaching the animals. The guests on the boat captured the dramatic rescue on their cell phones, holding their breath for a happy outcome. 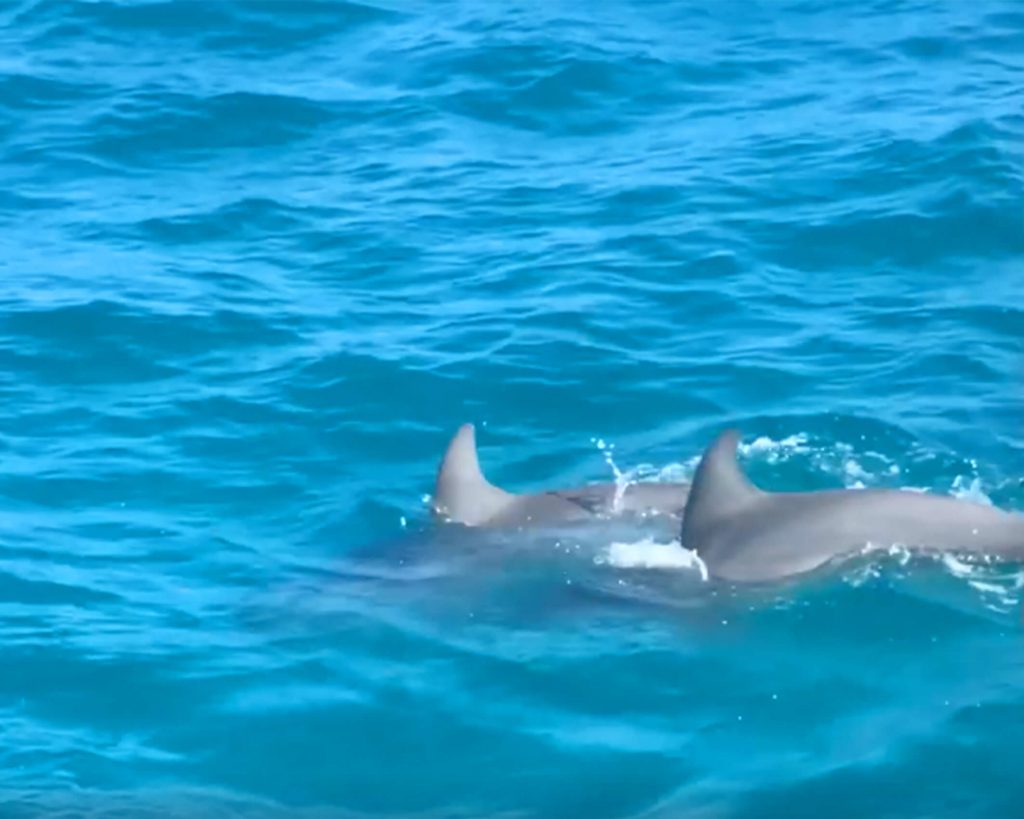 While Abbey stayed close to the mother reassuring her of their good intent, Tomas quickly swam towards the terrified baby who attempted to get away. Tomas was able to get close enough to cut the line a few feet from his tail and freed the baby dolphin.

As the two dolphins swam away, the guests onboard cheered with delight and relief.

Millions of people visit Key West each year to enjoy its crystal blue waters. For nearly thirty years, Fury Water Adventures has been the number one choice for excursions in, on and above the water, providing everything from snorkeling and parasailing to jet ski, glass bottom boat and sunset sails and much more. While everyday is an adventure with Fury, the dramatic rescue of little Jammer, as the Captain and Crew named him, will be forever etched in the memories of those onboard.

**Note About This Content: This Fury page includes content that reflects past events, attractions, or Fury news that is no longer up to date. As you are reading, please be aware that the information presented on this page is not current and should not be attributed as a current fact.