Couple Returns To Fury After Their Wedding 16 Years Ago 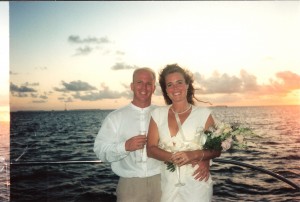 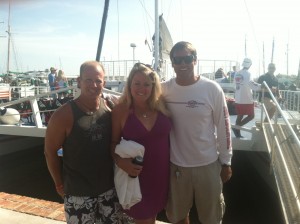 On June 15, 1996 Scott and Lynn Wolter embarked on a very special Fury Key West Sunset Sail. It was their wedding night. Amongst close family and friends, the two tied the knot at sea aboard Fury in Key West while the sun sank into the western horizon. Sixteen years later, they returned to Key West and made a point to do the Ultimate Adventure with us.

Standing on the docks at boarding time amongst the crowd, they spotted a familiar face in a Fury t-shirt, our own manager and captain Marius. As it turns out, sixteen years ago when Marius was a catamaran crew member, he happened to be one of the mates on their wedding cruise! The three chatted, caught up, and exchanged emails before the Wolters hopped aboard the Caribbean Fury and Marius began his day parasailing.

A few days later, Marius received an email from Scott with their wedding pictures, and sure enough, there were some pretty hilarious pictures of Marius working the trip! Get a load of these vintage Fury pix. While the Fury logo, board short styles, and our catamarans have changed over the years, one thing remains the same, Marius is still in Key West and so is Fury! We were thrilled to welcome back the Wolters to Fury 16 years later. We hope they’ll celebrate more anniversaries with us! 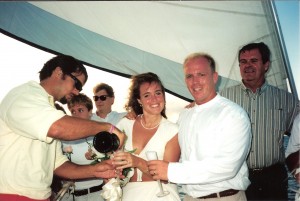 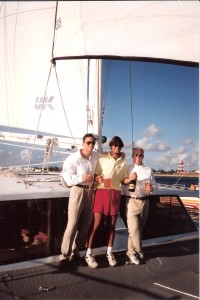 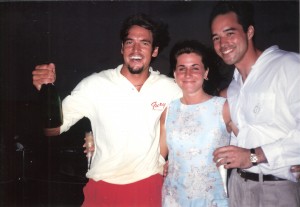 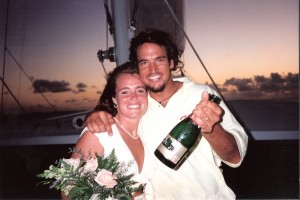 Don’t get so close to the bride! 😉

Another thing that remains the same is that Fury still offers wedding charters year round. If you’re planning a destination wedding in Key West, a Fury sunset sail is a wonderful part of the wedding weekend. We have wedding and charter specialists on our team and we’re also a preferred vendor amongst destination wedding planners all over the island! Give us a call! Or just enjoy the funny pix! 😉

Shayne Benowitz is a Fury crew member and freelance travel and tourism writer. Follow her on Twitter @ShayneBenowitz and email her at shayne@furykeywest.com.