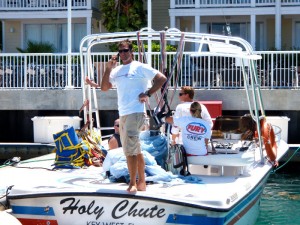 Boss Man Bubba Marius holding down the fort, originator of much of Fury’s jargon

Have you ever noticed that when you hang out with the same people day after day you begin to talk like each other? Sometimes you even create your own words or recreate meanings of common words. At Fury, we’ve got our own set of words and phrases that are completely unique to Key West and especially to Fury. It’s enough to learn nautical terms, but more importantly, if you want to be part of the crew, you’ve got to know what we’re talking about! Here’s a beginners guide to decoding Fury’s special jargon. 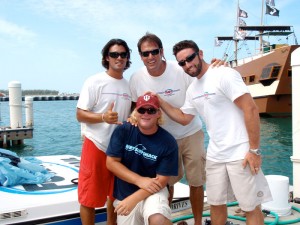 a moment occurring at work or with people from work that is particularly remarkable, unique, or interesting; worthy of being blogged about by Fury Girl : the kittens in the shed are totally bloggable

an endearing nickname often added at the end of a sentence when speaking with crew members : the visibility at the reef was sick, bro

1. an endearing nickname for the man in charge : boss man bubba

2. a nickname used for a friend or acquaintance : Hey, Bubba, throw me that line!

ORIGIN: an early Conch term often used to describe unfair nepotism or favoritism in business or government : the Bubba system

a state of being both relaxed and chill; often used to encourage someone to calm down : Chillax, bro, I’ll scrub the seats!

ORIGIN: teenage lingo from the late 1980s and early 1990s; re-popularized by Marius

a term used in good fun to describe a mate or captain who makes a dumb mistake, is acting lazy, or otherwise not quite performing up to par : He forgot to turn the batteries off. That’s a real donkey move! Or What a donkey!

ORIGIN: derivative of the earlier term: monkey; created and popularized by Nicole and Shayne

a term used in good fun to describe a mate or captain who makes a dumb mistake, is acting lazy, or otherwise not quite performing up to par; often used to describe a group of crewmembers : Listen you monkeys, no one is leaving early today! We have to replace the springs on the trampoline!

ORIGIN: created and popularized by Marius

an extreme version of drama : Please, bro, stay out of the Surf Shack today! I don’t need any trauma!