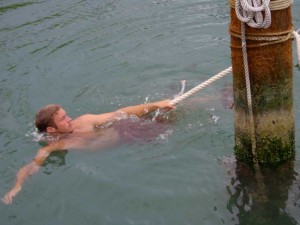 Stephen running a line from the catamaran around a piling

In Key West at least, Fay felt like nothing more than a long, heavy downpour for most of Monday afternoon. The eye of the storm made landfall in Key West around 4:00pm and twenty minutes later, the rain stopped, the wind settled, and Key West was left a cool, soggy, overcast island. There were no power outages, no flooding, and minimal fallen palm fronds and debris.

Still though, at Fury, we had to prepare for the worst. Sunday morning, all visitors were issued a mandatory evacuation, so as the tourists streamed from the island, Fury crewmembers got to work. I showed up to the Margaritaville Marina bright and early as our team huddled to formulate a plan of action. Crewmembers disbanded to the three Fury catamarans to strip the boats of extraneous goods like kegs and coolers, and other items were stowed away in hatches and crew rooms. 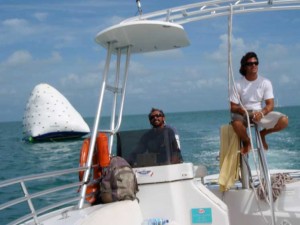 I hopped onto a parasail boat with Captain Charlie and Captain Davey and we zoomed off to Adventure Island in the Northwest Channel to tow the iceberg ashore while other crewmembers deflated the teeter-totter, secured the water trampoline to the barge, and shuttled the kayaks and jet skis back to land.

We towed the iceberg to the small stretch of beach at the end of Simonton Street where local revelers in the water were awaiting the storm and quickly pounced on the iceberg beachside, scaling to the top before Captain Scotty and his team met us to deflate it and stow it away. Charlie, Davey, and I then zoomed over to City Marina where we tied up the parasail boats securely in the protected seaport. 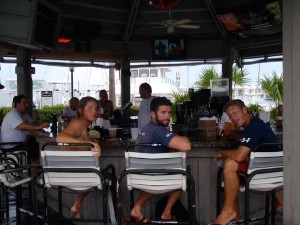 Mr. Saunders, Fury’s owner, treated the crew to a lunch break at everyone’s favorite Mexican restaurant, Salsa Loca, before we headed back to the docks to move the catamarans to the ferry boat terminal where they would be protected. A group of us shared in a celebratory drink at a nearby poolside bar when the task was finally finished around 5:00pm.

That evening’s “storm party” felt very un-stormlike with no wind and no rain as we all gathered for drinks and a barbeque in the large backyard of crewmembers Ronan and Shon’s house.

On Monday, as the storm spiraled through, I hunkered down and stayed out of the rain while many locals hit the beach to take advantage of rare, surfing waves that rolled onto the island’s south shore. That evening, I attended one last “non-storm party” at nineonefive, the always-delicious restaurant and wine bar for a mellow evening as the last torrents of rain rolled over the island.

Tuesday was spent returning the boats to their normal slips, and Wednesday, we’re back in business, so come down and join us!

For more fun in Key West, check out my Attractions Blog!

Shayne Benowitz is a Fury crewmember and freelance writer who is working on her debut novel. Shayne can be reached at sbbenowitz@gmail.com.