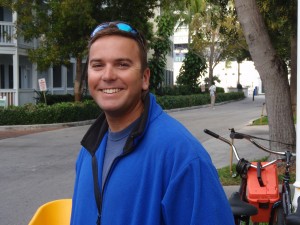 If you’ve been parasailing with Captain Scotty, it’s an experience you’re not likely to forget. He is one of the most friendly, funny, and lively people on this island. He greets friends, customers, and strangers with his sunny smile day in and day out. When I first moved to Key West four years ago, Scotty was one of my very first friends.

For years he’s been easy to spot in a crowd with his signature long, blonde, “surfer dude” hair. Well, not anymore. A few weeks ago, I was working with him on the parasail boat and he confided in me that he almost cut his hair off the night before. I love a guy with long hair, but I have to be honest, the clean-cut look is really more my style. I encouraged him to go for it. 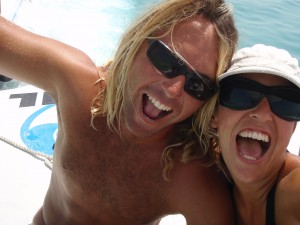 Vintage Scotty with his long locks.

We were parasailing a group off the Ultimate Adventure when he started to ask our customers if they had a rubber band for his hair. The next thing I knew, he had his knife out and asked me to cut his ponytail off. I told him no. I didn’t want to be responsible for it and plus I don’t think I’m that great of a barber. He insisted, though, and there I was hacking into his ponytail with a knife! I’m sure our customers thought we were crazy, but everyone had a good sense of humor. Some even took pictures! 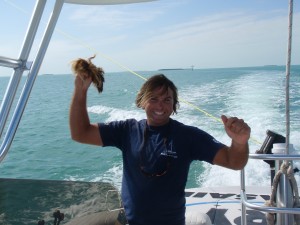 When we returned to the catamaran, the crew was stunned to see him without his long ponytail and he told everyone that I scalped him! When we had a break later that afternoon, he cleaned the look up a little. I liked it, but I told him he should go all the way and cut the rest of it off at home.

A few days later, I showed up to work and walked to the shed to meet the parasail crew. A handsome clean-cut man that I’d never seen before was standing there. When I got closer, I realized it was Scotty. He looked amazing! I had to run my fingers through his short buzzed hair. The guys might have teased him a little bit, but overall everybody loves the new look, especially the ladies! He says he’s gone out a few times since he chopped off his locks and people who know him don’t even recognize him. I know I get a little thrill every time I see him now!