Sunday morning, the Fury crew transformed into a 1950s surf movie as Nicole drove her surf wagon (we nicknamed her “Woody”) around the island picking up Captain Westy, Stephen, Captain Charlie, me, and four surfboards and cruised to South Street Beach to see if the strong south wind of Gustav’s aftermath was churning up the surf. 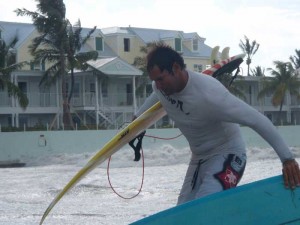 Marius prepping his surfboards for a morning session.

As we pulled up, we saw everyone piling out of their trucks and heading to the beach with surfboards in tow. Captain Marius, Captain Davey, Ronan, and Justin were all there. Indeed the gusty winds resulted in some gnarly waves and the sets kept rolling as the tide gradually came in. I couldn’t resist jumping in the water and bodysurfing alongside the boys on boards. The water was milky and full of seaweed and debris from all of the sand churned up during the storm.

After awhile, I joined Nicole on a couple of lounge chairs and we watched and cheered on our fearless Fury boys as they worked hard to catch some waves. Marius made it look easy as he caught wave after wave. Charlie felt victorious as he caught his first-ever wave, quickly followed by two more, on his Cuban flag custom board. Justin devised a system of running up the concrete jetty and timing it out perfectly so that he jumped in the water right as a wave was rolling in. But Ronan wins the prize for catching the wave of the day on his new Ron Jon longboard. It seemed like three waves in one as he surfed a nice long ride towards the shore.

When Charlie and Stephen came onshore to sit with Nicole and me during a breather, Charlie said that he felt like he was in an old surfing movie hanging out with the “babes on beach blankets.” 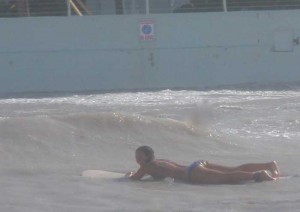 It was a thrill watching the boys, and I really wanted to get in and give it a try. Ronan let me borrow his board and I did my best to paddle out, although I have to admit, staying balanced on the board was tough and the wind really wanted to whip the board out from under me. Once I got to the breakers, the waves seemed even more formidable, and I quickly realized I was in way over my head (did you like the pun? ;). I turned the board around and let the waves push me back to shore without even trying to standup. Oh well, I guess I need a few more lessons under my belt before I can surf a storm.

As the tide came in, the waves got mushier and we packed up our beach blankets, hungry for breakfast. By this time, the south end of Duval Street had flooded further, so we waded back to the car desperately ready to shower off all the storm’s tidewater, sand, and seaweed.

It was a really fun morning, but we couldn’t help but worry about the havoc that Gustav would be wreaking later in the Gulf Coast.  Check in with the local surfer-rally-website www.kwsurf.com for the scoop on where it’s breaking.

Shayne Benowitz is a Fury crewmember and freelance writer who is working on her debut novel. Shayne can be reached at sbbenowitz@gmail.com and visit her website at http://web.me.com/shaynebeth/.