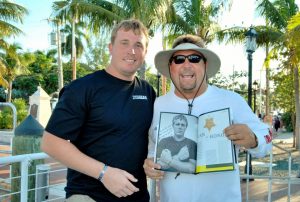 Although some of our loyal Fury fans might consider the men and women of the Fury crew heroes at the reef, it’s not every day that a true American hero graces us with his presence. If you’ve watched the news lately, you’ve probably seen that President Obama awarded the national Medal of Honor to a Marine sergeant on September 15, 2011. That sergeant is Dakota Meyer, a 23 year-old from Kentucky, and veteran of the Iraq War and the War in Afghanistan.

On a sunny October afternoon in Key West, Captain Chuck was at the helm of the Caribbean Fury when a young man came up to him and asked, “Captain Chuck, were you ever in the military?” Chuck told him no, and the young man added, “Well, you run a real good ship.” They continued chatting when Chuck realized the young man was Dakota Meyer.

“I had seen him on 60 Minutes and all over the news,” Chuck told me. He called the office and made sure that Dakota and his girlfriend were given the Ultimate Adventure on the house. Chuck said Dakota was polite, and extremely humble saying that he wasn’t a hero; he was just doing his job. 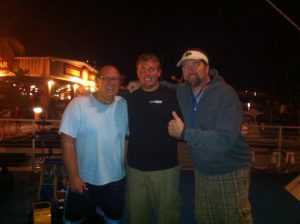 Chuck gave him one of his Fury crew shirts, and when Dakota returned for the Commotion on the Ocean the next night he brought Chuck a signed copy of his GQ cover issue. Chuck reports that Dakota and his girlfriend had a great time on the Commotion!

“There’s times where I think we’ve screwed this world up a lot,” said Chuck. “Then you meet a guy like that and it makes you think we have a chance. It restores your faith in humanity.”