In Honor of Shark Week – Questions About Sharks in Key West 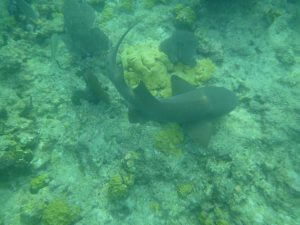 A nurse shark at the reef in Key West.

There’s a funny thing that happens when you live on an island. You tend to lose track of time and tune out the rest of the world. It’s a pretty simple, easy, breezy lifestyle. We also watch a little less TV. With so much natural beauty around, it’s more entertaining to go outside, get on a boat, or watch the sunset.

That being said, we heard it was Shark Week on the Discovery Channel! And people are excited! Cool! In Key West, it’s Shark Week every week and you have the chance to swim with a variety of shark species at our reef anytime you join us on a snorkel trip. People usually have one of two reactions to this fact. Excitement or fear. And they usually have a lot of questions. Why don’t we go over a few Key West shark FAQs so you’re bases will be covered the next time you take the plunge.

Are there sharks in Key West?

Yes, of course there are sharks in Key West. We’re situated on a small island surrounded by the waters of the Atlantic Ocean and the Gulf of Mexico–shark’s natural habitat.

What kind of sharks can I see at the reef?

The most common shark to see at the Key West reef is the docile nurse shark. We also see reef sharks often.

What are the chances of seeing a shark?

It’s no guarantee that you’ll spot a shark while snorkeling in Key West, but it happens more than you might think. We see sharks at the reef at least once a week, and probably more often than that!

Should I be scared?

No! While spotting a shark will probably give you an initial fright, it’s such an exhilarating experience. A good rule of thumb is, if you don’t mess with it, it won’t mess with you. Nurse sharks and reef sharks are nocturnal and of the more docile variety, so they’re not looking to strike out in hunger. Usually, you’ll see a nurse shark snoozing underneath a coral ledge or a reef shark swimming in the other direction. It’s fun to see how long you can follow them before they disappear into the blue.

Here’s a fun fact to lay your fears to rest, there’s never been a fatal shark attack in Key West. And I always tell my passengers that if I’m not afraid to swim in the water with sharks, they shouldn’t be either!

What should I do if I see a shark?

Definitely don’t try to wrestle it or anything! Just observe it from a safe distance and take it all in.

It’s hard to keep it all straight because I’ve definitely seen a lot of them over the years in Key West. I remember one of my first times snorkeling with Fury as a passenger (before I started working here) and the first thing I saw when I jumped in the water was a giant reef shark! There was also one time when a shark appeared a little too close for comfort and my instinct was to swim away!

What other sharks are found in Key West?

Our spearfishing friends are the ones who have crazy shark encounter stories and they’ve seen bull sharks and hammerheads. Lemon sharks, bonnethead sharks, and black tip sharks are also common down here.