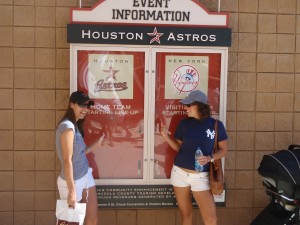 In Florida, the month of March means a few things. In Key West, we’ve all got Spring Break on the brain. However, further up the state it’s all about baseball Spring Training. This weekend, check-in booth gal Becky, parasail/catamaran mate Rob, and I took a little road trip up to Orlando to check out the action.

I’d never been to a Spring Training game before, but since I’ve lived in Florida I’ve always wanted to go. Becky, being the Keys native, has been many times, and we were all super excited to see our teams play. Rob’s an Atlanta Braves fan. Becky roots for the Houston Astros. And I am a diehard New York Yankees fan, especially since attending Game 6 of the World Series in November.

We left early Friday morning to catch an evening game at Disney’s Wide World of Sports complex, home to the Braves Spring Training camp, where they took on the Detroit Tigers. We got to the stadium early to check out batting practice and grab some beers and hot dogs. Part of the fun of a pre-season game is that the stadiums are so much smaller than the major league ballparks, so you can get up close to the players. It was a tight game that went to the 10th inning and resulted in a 4-4 tie. 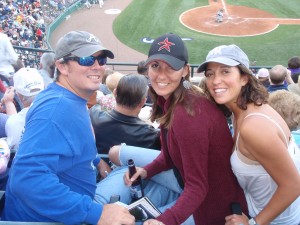 The next morning we drove over to Kissimmee to the Astros stadium. Becky was decked out in her ‘Stros hat and t-shirt while I wore my Yankees hat and Jeter shirt. When we arrived, the Yankees were in the midst of batting practice, and I was able to stand right behind home plate in the stadium while A-Rod, Mark Teixera, and manager Joe Girardi warmed up! My heart was definitely aflutter! Becky queued up by the Astros’ dugout hoping to get the autograph of #9 Hunter Pence, but he never materialized.

The game was exciting (even though my man Jeter had the day off). Robinson Cano hit a homer to start the runs in the second inning, but as the game drew on the Astros delivered. The final score was 8-6, Astros. I was a good sport and shook Becky’s hand. After all, it’s only the preseason ;)! We hopped in the car and made the trek back to Key West just in time to squeeze in a couple more weeks of Spring Break fun. Hope to see you down here soon!