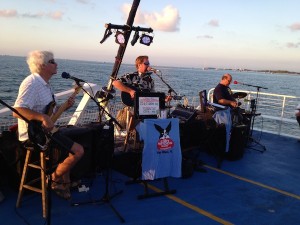 Last night, the Commotion on the Ocean left the dock for a very special sunset sail. The members of the Cory Heydon Band–Cory, Tom, and Terry–were named Honorary Conchs by Key West Mayor Craig Cates. What is an honorary conch, you might be wondering?

Well, as you may know, anyone who is born in Key West has the distinction of being a conch. It actually dates back to a time in Key West when it was traditional to display a conch shell in your front yard to signify a birth. That way, neighbors knew to come over and welcome the newborn into the world. The conch shell is a major symbol in Key West. After all, this is the Conch Republic! When you visit, chances are you’re going to try some conch fritters or conch chowder, and maybe even take a conch shell home as a souvenir. Or, even better, spot one on the seafloor while snorkeling with us!

Many of us move to Key West, and before long this place starts to feel like home. They say once you’ve lived here seven years, you become a freshwater conch. The distinction of Honorary Conch comes with a ceremony and a pretty awesome plaque, which was presented to Cory, Tom, and Terry last night aboard the Commotion. 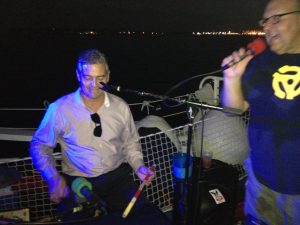 Scott on the drums!

“I’ve lived in a lot of places, and Key West is the only place where I ever felt like I truly fit in,” said Tom.

There’s something really special about this island. Cory and Terry said a few words of gratitude to the crowd, too. They’ve been rocking our Commotion on the Ocean since 2006 and have become a true Key West fixture. It’s no wonder they were awarded with this honor.

They put on a great performance with a few new songs in their repertory. Cory’s parents were on board, along with other family members, making the night even more special. Howard Livingston of the Mile Marker 24 Band and a few other guest musicians took to the mic for a couple of songs, and our own Scott Saunders got into the action on the drums and as a backup vocalist! We all had a ball! The Commotion on the Ocean sets sail seven nights a week, and we certainly hope to see you on board soon.

If you’d like to join us for a special holiday sail, come on out this Saturday December 22 for our Second Annual Sunset Sail with Santa to benefit the Samuel’s House. The trip departs at 5pm and we’re asking for a $20 minimum donation while kids sail for free. It promises to be a jolly good time! After all, Santa will be there!