Commotion on the Ocean Press Release

“Commotion on the Ocean” 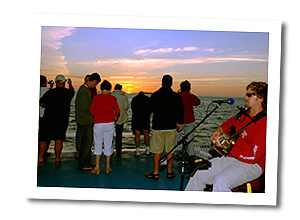 Fury Water Adventures’ nightly “Commotion on the Ocean,” is the most popular Key West sunset sail. The catamaran’s nightly cruise is a mix of crystal-clear blue water, the spectacular backdrop of the island of Key West, live entertainment and the famous Key West sunset.

When Fury management challenged Nadene Grossman, owner of “We’ve Got the Keys,” to improve the original nightly sail she went to long-time friend and Key West entertainment guru Charlie Bauer.

Putting live music on the bow of a large catamaran while under sail was a challenge. They searched for the right generator, speakers and sound quality and the result became “Commotion on the Ocean.”

This innovative live music sunset sail has become so popular with visitors and locals that Fury has added a second “Commotion on the Ocean” catamaran. Not only guests have been overwhelmed by the success of the cruise, but out-of-town talent has requested bookings for the sail. Grammy nominated songwriter James Slater has performed, as have the Carter Brothers, the Massacoustics and Chris Cook. Some of Key West’s finest local talent also performs.

The commotion begins when the large catamaran leaves the docks and only quiets down while everyone looks for the ‘green flash’ as the sun sinks into the Gulf of Mexico. Green flash or not, the “Commotion on the Ocean” begins again after the sunset and guests carry it with them long after the boat docks.