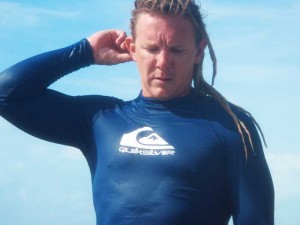 Captain Westy taking a breather during a surf session.

What do we do in Key West when the winds are blowing offshore and there is an opposing swell out in the Atlantic? That’s easy. We hold an employee “board meeting.” Conditions were favorable for surf at the outer reefs today and Marius, Riaan, Davey, and I loaded the Fury Flyer with supplies: short boards, long boards, food, water, and dry bags stuffed with wetsuits and foul weather gear. We were prepared for any situation on the seven mile trip.

When our crew left the harbor, the choppy conditions made us aware that we would not see many other boats out pleasure cruising for the day. Anticipation was high the entire ride out as the parasail boat cruised over rolling swells heading for the reef.

About four miles out, it happened. “The spray, the spray!” Riaan yelled from the bow of the boat. He could already see the spray from the waves crashing in the shallow reefs. 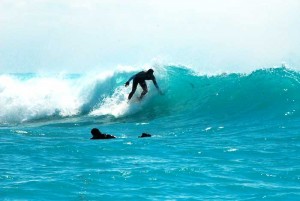 Everyone on board was bumping into each other as boards were pulled out of bags and wetsuits were being yanked on in a race to be the first in the water. Riaan won the race forgoing any wetsuit as he jumped over the side into the 68 degree water. (I know what you’re thinking, wetsuits? For those of us that live in Key West, 68 degrees is a little chilly).

The waves today were special. In these latitudes, the Atlantic Ocean isn’t known for producing crashing breakers and barrels. Our reefs actually stop this from happening by breaking up any swells, which makes the water more like a lake than a point break.

Marius and Riaan slipped right into a routine of making every wave they caught look easy. These two South African friends of ours started surfing early in life, and it shows. Davey used this session as a warm-up for his upcoming trip to California. Me, I was just loving that all the factors came together to make this day happen.

Technology today allows us to go online and look at waves halfway across the globe in an instant, but nothing beats the adventure of being out there in the waves and sharing them with no one except for three friends. That’s what I call a great day.

I’m still smiling about it.

Captain Westy is a catamaran captain at Fury Water Adventures. He’s been living the dream in Key West for four years.